The Stained Glass at Nonsuch Mansion

When the Friends began their restoration work in 1991 they discovered eight individual panes of stained glass in one drawer of the kitchen dresser as well as a gothic window propped up against a wall in the inner larder. There were other pieces of stained glass in the main reception rooms. After consultation with the Victoria and Albert Museum who declared the glass to be "a most interesting collection of considerable antiquarian importance", a successful appeal to restore the glass was launched by the Friends. The campaign was spearheaded by two members of the Friend’s management committee, Roy Smith, who was Treasurer for the Appeal and Douglas Williams, who did most of the initial research into the history of our stained glass. As a result of these gentlemen’s efforts, generous financial help was forthcoming from the Worshipful Company of Glaziers, the Sutton Town Lottery, the Cheam and Epsom Decorative and Fine Arts Societies, Rotary Clubs and the Joint Management Committee of Epsom & Sutton Councils which manage the park, but above all help came from the Friends themselves and from many individuals in far flung parts of the world who know and value our park at Nonsuch. It was soon possible for the Friends to commission Chapel Studios of Kings Langley to carry out the cleaning and restoration of the glass.

When alterations to the house, carried out by the authorities in 1996 involved removing the old walk-in safe on the ground floor, to provide a toilet for the disabled, a second cache of stained glass was discovered. Needless to say this glass was in need of careful cleaning and restoration and a second appeal was launched. Unfortunately Roy Smith had passed away and Douglas Williams owing to ill health had been forced to retire from active participation in the Friends so it was left to our Treasurer of the time, John Garlick, and our Chairman, Gerald Smith, to run this second appeal. A donation in the memory of Roy Smith, matched by a donation by Douglas Williams opened the fund. Not long after this a very generous donation which made up over two thirds of the money required for the appeal was received from Joy Hallam. This was made in memory of her husband Ted. Once again the rest of the money came from our ‘Friends’ far and wide who have taken the history of Nonsuch to their hearts. During 2001 the Cathedral Studios at Canterbury Cathedral undertook the cleaning and restoration work and the Friends are delighted that the full collection of glass can now be viewed by visitors to the Service Wing Museum.

The glass is set in a wooden frame and contains the coats of arms of various people connected with the Farmer family in what is probably eighteenth century English glass. A roundel in the centre contains William Francis Gamul Farmer’s initials. The top half of the roundel contains an inscription in medieval German. It reads in English "Caspar Muller Mayor of the council of Frauenfeld and his married spouse Elsbeth Geselhans 1601". 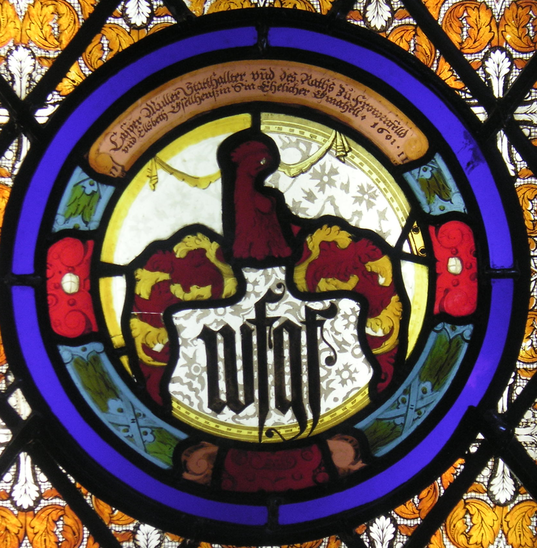 The Coat of Arms

This is a coat of arms commemorating the marriage of Jane Seymour to Henry VIII. It appears to have been "aged" deliberately. 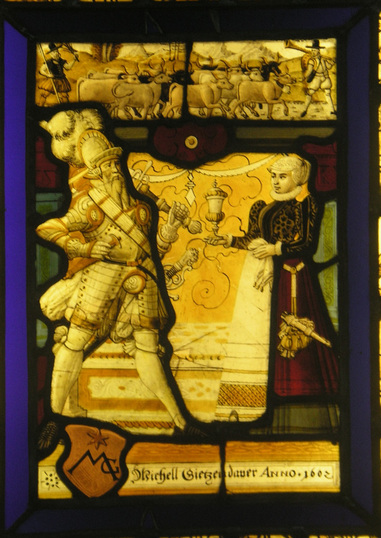 This shield holds a fleur de lys on a flameburst in a red and green border. Above the shield is the English Crown representing Henry VIII. The background is made up of printed quarries. This piece dates from the early nineteenth century.

The complete roundel is a painting of an Alexandrian Parakeet against a Dutch background and signed by E. Margaret Pearson, 1776. The half roundel features a parrot and a butterfly with a landscape background. Only half the glass plus several fragments remain. The missing portion of the roundel was made up with sheet lead and the fragments from this side placed as near as possible to their original position. The inspiration for both roundels probably came from Dutch engravings. 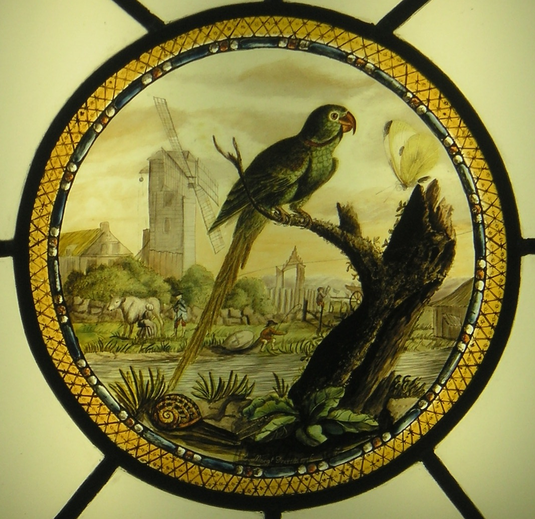 Very little remained of these panels. On one panel the outline of shield and crown and some of the quarry surround was found. The other panel had a fragment of the shield in situ and this showed a shield with a flameburst in a red and blue border. Above the shield was a crown. The shield and crown are surrounded by quarries.

The decision was taken to make up some content for the centre shields. The flameburst shield was turned into the coat of arms used by Francis I (King of France during Henry VIII’s reign). This is a salamander on a flameburst.

The panel where none of the centre decoration remained had the coat of arms used by the the Farmer family placed on the shield. The shape of the crown is retained but no crown has been created as it would be inappropriate to include the royal crown above a gentleman’s coat of arms.

Stained Glass in the Mansion House

Four panels of eighteenth century English glass have been placed in the window on the staircase. There are two roundels of cut glass with a Bristol border probably by William Price and also two paintings of halberdiers, copied from work by Salvador Rosa. These are probably by William Peckitt.

There are four heads flanked by the four coats of arms associated with the Farmer family. The heads are sixteenth century French glass almost certainly from churches vandalised during the French revolution. There are also nineteenth century portraits of Henry VIII and Elizabeth I and a sixteenth century representation of Saint Andrew and a Holy Roman Emperor, probably Charles V. On his right shoulder is a double headed eagle which has signified emperors in both Germany and Russia from 800 AD.

Our Reseach into the origins of the stained glass and how it came to end up in Nonsuch Mansion continue and we would be delighted to hear from anyone who has any information on the topic
.
​The Friends of Nonsuch (registered charity number: 1053923)
Enquiries to [email protected]